This photograph has an inscription on the back which is written mostly in Finnish: 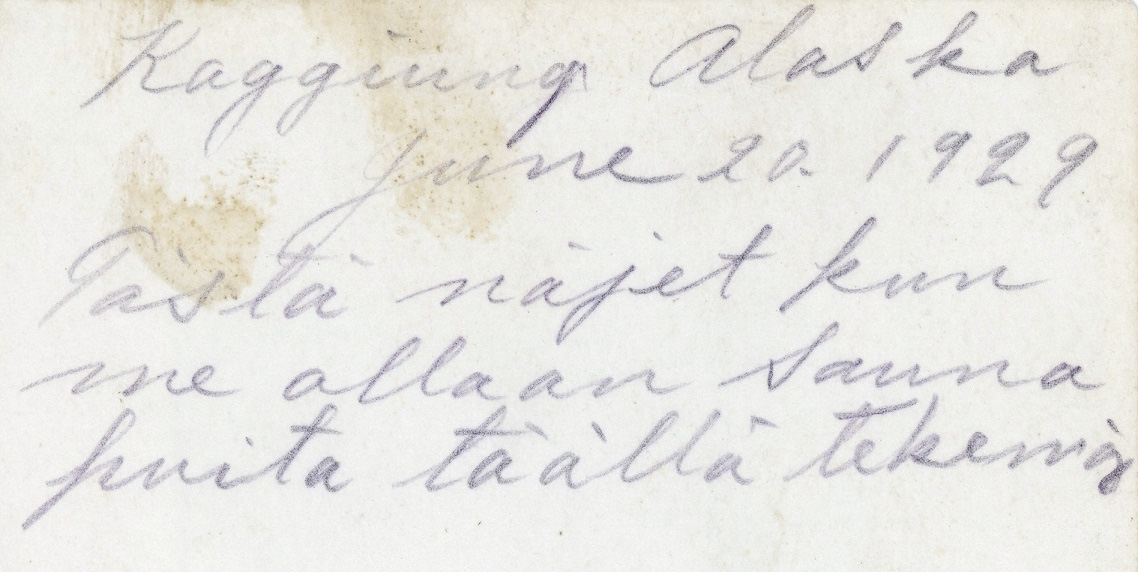 I was able to read enough of the Finnish words to guess that the men were cutting wood to heat a sauna.  After I published this post, readers in Finland confirmed that guess.  Luisella from Tra Italia e Finlandia helpfully typed out the inscription: Tästä näjet kun me ollaan sauna puita täällä tekemässä.  Susupetal from susupetal photo gallery kindly translated it: Here you can see how we are cutting wood for sauna.

The location, spelled Kaggiung above, refers to an area in Alaska where an Eskimo village called Koggiung was once located.  The village was on the Kvichak River near Graveyard Point, where the Kvichak flows into Bristol Bay.  Graveyard Point can be found on Google Maps.  The last cannery in the area closed in 1959, but seasonal fishing still takes place there.

Bristol Bay is home to the largest salmon run in the world.  In the first half of the twentieth century, many canneries were built around the bay.  Immigrants were recruited to work seasonally in the canneries, including Scandinavians from the Seattle area.  Italians, Chinese and Filipinos were recruited from the San Francisco area.

Some beautiful pictures of Bristol Bay can be seen on the website of the World Wildlife Fund.

We know from the inscription on the back of the photo that the men were gathering for a sauna on June 20, 1929.  In 1929 the summer solstice would occur on Friday, June 21.  A sauna was probably not an unusual event, but a sauna on the eve of the solstice would have been a festive occasion.

If you’d like to learn about the history of fishing in Bristol Bay, the Anchorage Daily News produced an excellent short video in 2015: