An inscription in pencil on the back of this carte-de-visite says simply: “Dr. Sanford 1883.”  She was easy to identify, and her individual story is fascinating and inspiring.  I also learned that Dr. Sanford’s life and career were closely connected to those of other pioneering women in medicine and in other fields who supported and encouraged each other throughout their lives.

A Quaker, Amanda Sanford (1838-1894) attended the Friends Academy in Union Springs, New York.  She then taught at Emily Howland’s Sherwood Select School.  Howland was a prominent abolitionist and suffragist who encouraged Sanford to pursue a career in medicine.  Later in her career Sanford would become an active suffragist and educator herself.

In 1871 Amanda Sanford became the first woman to graduate from the University of Michigan Medical School, doing so with highest honors.  In 1870 Michigan had become the first accredited state medical school in the country to admit women, a change which represented a major breakthrough in women’s efforts to obtain professional educational opportunities in the United States.  A residential house at the medical school was recently named in Dr. Sanford’s honor, and there is a page about her on the school’s website.

A more detailed article about the first group of women admitted to the University of Michigan Medical School, Five Women Determined to be Doctors, can be found here.  The five women were Amanda Sanford, Anna Searing, Elizabeth Gerow, Eliza Mosher and Emma Call.  They had trained together in Boston as interns at the New England Hospital for Women and Children.  Sanford and Mosher later went to London together for additional training (1879-80).  At the suggestion of Elizabeth Blackwell, who was also in England, they went to Paris to gain additional clinical experience.

In 1884 Amanda Sanford married Patrick Hickey, a widower with children.  She died ten years later, from pneumonia, at only 56 years old.  According to the note on the back of the carte-de-visite, the photo was taken in 1883, the year before her marriage. 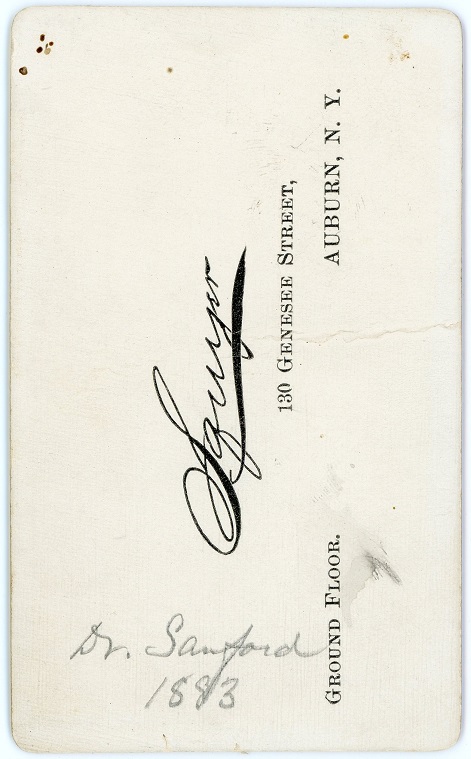 The portrait was made by Horatio Seymour Squyer in Auburn, New York, where Sanford had a private medical practice.  I couldn’t help but wonder who might have written the note.  My first thought was that she might have given the photo to a friend or colleague.  But would that person have made a note of the year?  Then it occurred to me that Squyer might have written the name and date himself, and that he might have kept this CDV for his own records.

Interestingly, another CDV by Squyer surfaced a few years ago featuring a more well-known American: Harriet Tubman.  Tubman also lived in Auburn, New York, in a house she had bought in 1858 from New York Senator William Seward (later Secretary of State) at his invitation.  She had also been encouraged to move to Auburn by her friend Lucretia Mott.  Squyer’s portrait of Tubman, made around 1885, is now at the Smithsonian National Portrait Gallery.  You can see it here.