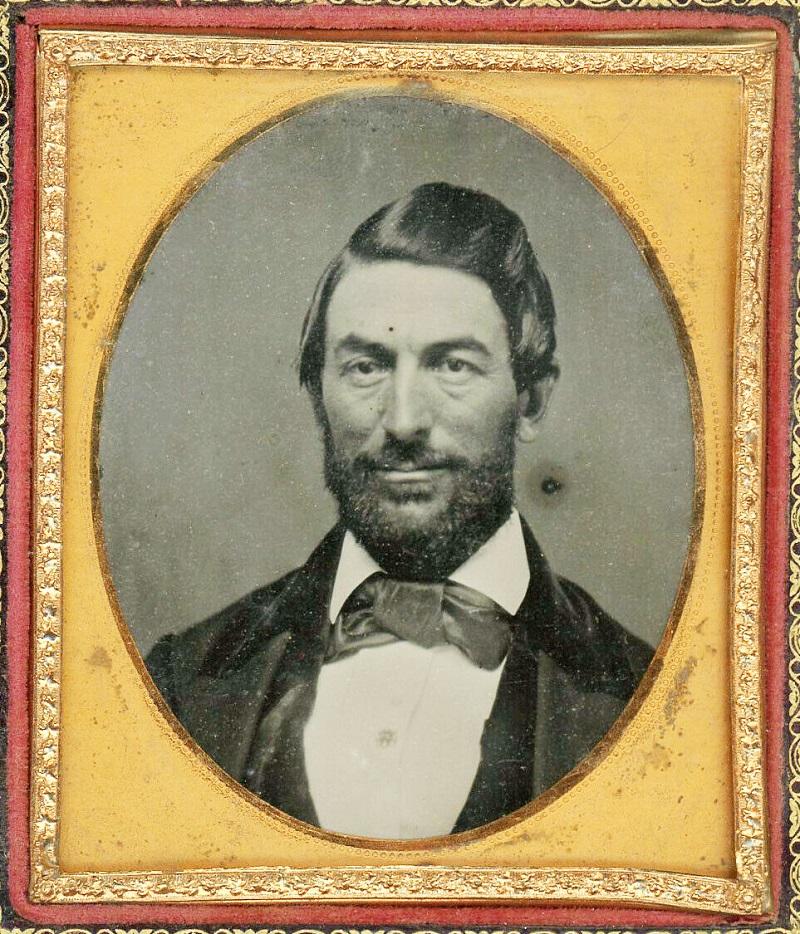 The portrait above is an ambrotype, or photograph on glass, by an unknown photographer.  Ambrotypes were introduced in the United States in the early 1850s and remained popular for about a decade.  They were simpler and less costly to produce than daguerreotypes.  Eventually they were replaced by tintypes and albumen paper prints (such as the carte-de-visite), which were less fragile than glass plates.

The man in the photo is Charles Henry Crippen, a farmer who lived in the Berkshire region of western Massachusetts.  He was born in 1822 in the town of Great Barrington.  In 1844 he married Susan Isabelle Race, also from Great Barrington.  They continued to live and farm there until Charles’s untimely death from heart failure in January 1865, when he was just 42 years old.  Their union produced two children, a girl in 1857 and a boy in 1864.  Six months after Charles died, the couple’s sixteen-month-old son died from pneumonia.  Susan must have been devastated after losing both her husband and her son, but she still had a seven-year-old daughter to care for.  She married again the following year.

Tucked inside the case of one of the portraits was a small newspaper clipping:

A very pretty Leap Year Sleigh Ride was got up by some of the Young Ladies, in this village, on Tuesday afternoon by inviting the gentlemen to participate with them in the pleasure of a Sleigh ride to Lenox, the satisfaction of eating one of Wilson’s inimitable suppers, and the festivities of a little dance, to the music of “Charlie Crippin’s” Violin after which they very gallantly footed the bills, and waited upon the gents to their homes.  We hear it spoken of, by those who were among the crowd as a very pleasant affair.

The town of Lenox would later become closely associated with the music festival at Tanglewood, the summer home of the Boston Symphony Orchestra.

45 thoughts on “Charles and Susan Crippen”