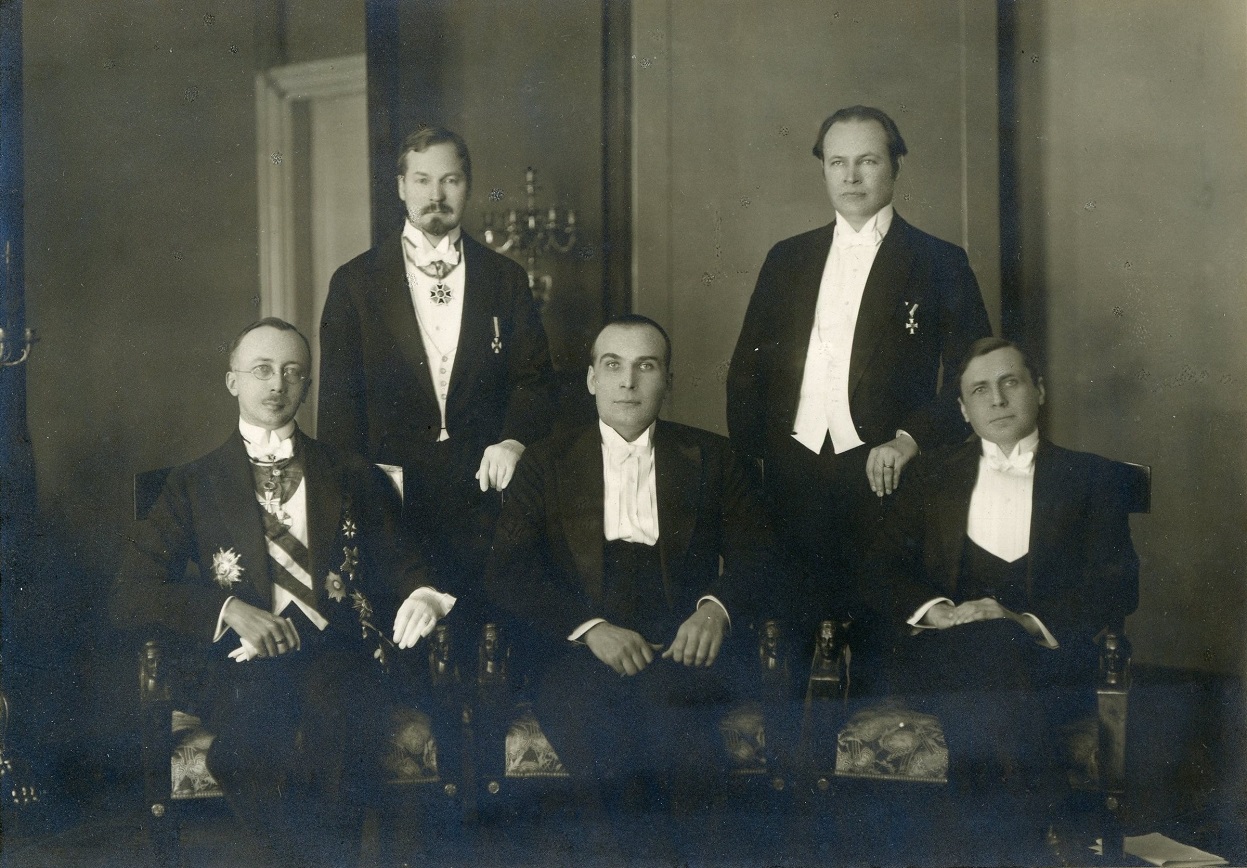 This formal portrait has a handwritten inscription on the back: “Rudolf Holsti, Tallinna, 1923, helmikuussa.”  Tallinn is the capital of Estonia, and helmikuussa means in February in Finnish.

Rudolf Holsti (1881-1945) became one of the founding fathers of the Republic of Finland after that country declared its independence from Soviet Russia in December 1917.  He served as Minister of Foreign Affairs twice (1919-1922 and 1936-1938).  He represented Finland at the League of Nations and served as Envoy to Estonia (1923-1927).  In 1940, his open criticism of Nazi Germany made it necessary for him to move with his family to the United States, where he was offered a teaching position at Stanford University.

Here he is in the portrait above:

Knowing that Rudolf Holsti was Envoy to Estonia in 1923, I hoped to identify the other men in the photograph.  I quickly identified the man seated in the center as Juhan Kukk, at that time serving as State Elder, or Head of State, of the young Republic of Estonia.  Juhan Kukk (1885-1942) served as State Elder from November 1922 to August 1923.

I had assumed it would be easy to identify the other three men in the photo, but that turned out not to be the case.  I looked at photos of leading politicians of the newly independent Baltic states–Estonia, Latvia, Lithuania, Finland and Poland–which shared many common interests as former provinces of the Russian Empire.  Occasionally I thought I could see a resemblance, but it was impossible to be sure. 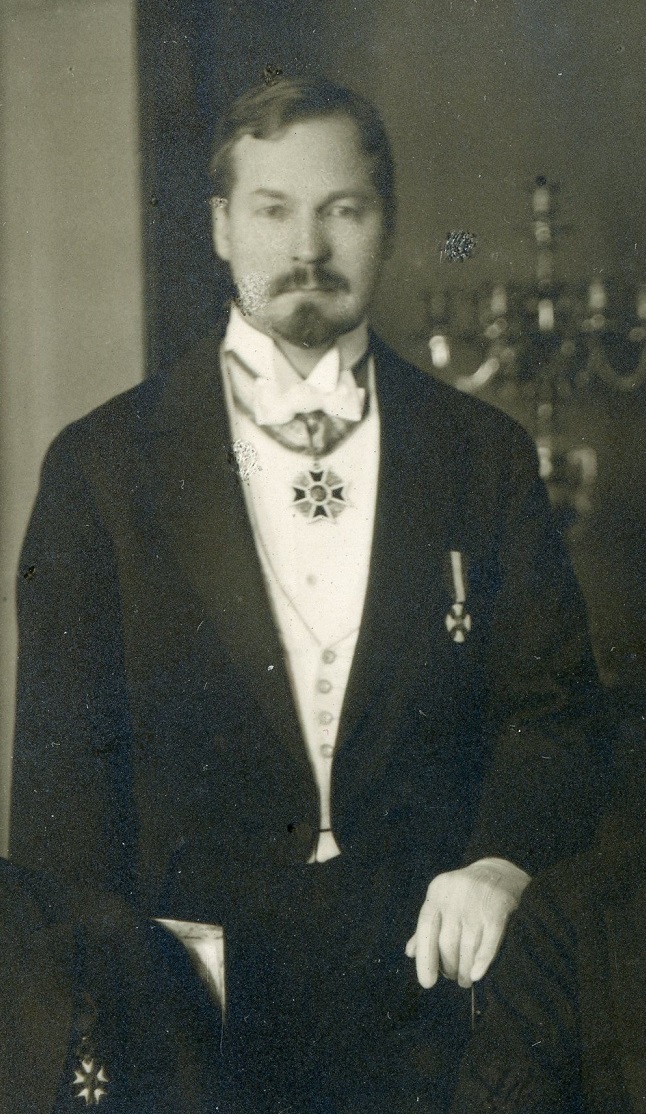 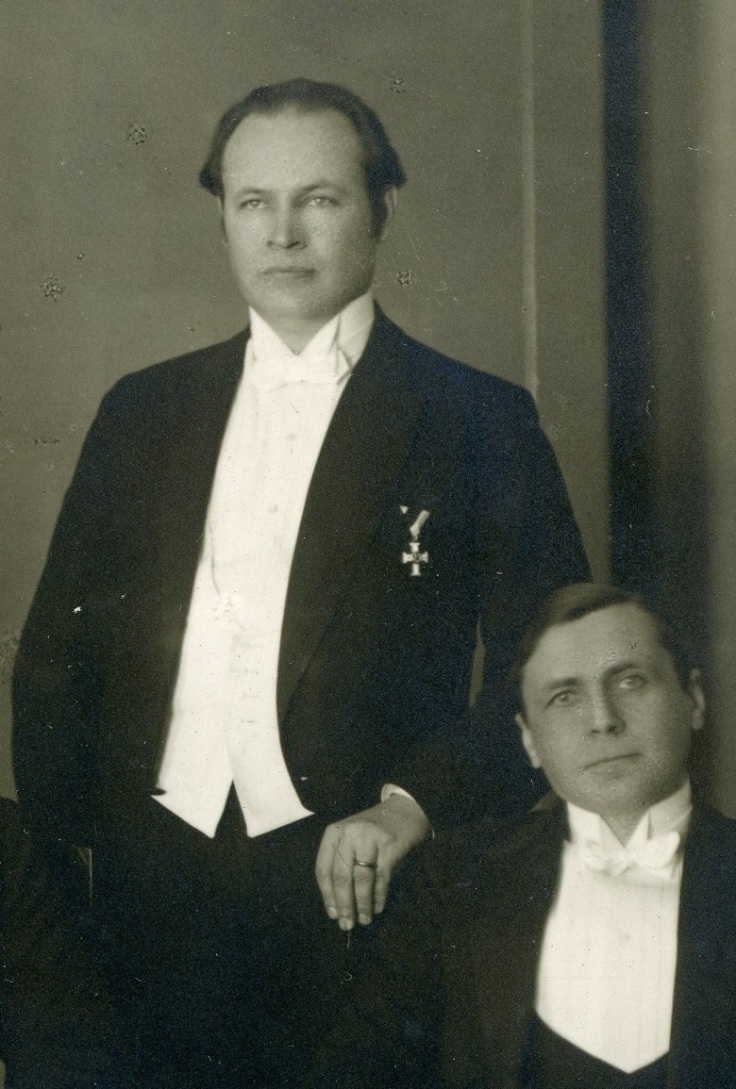 Frustrated by my lack of progress in identifying these men, I decided to return to Juhan Kukk. Here he is in my photo:

A little more searching turned up a book about him, published in 2015 in Estonian and English but not available in the United States.  The book is Juhan Kukk, Framer of Estonian Independence, by Anne Velliste.  When I saw the cover, my jaw dropped:

His hands are in a slightly different position, but the two photos must have been taken only moments apart.  I need to find out what was happening in Tallinn in February 1923!

Update: I’ve been in touch with Anne Velliste, who very kindly identified the man seated at right as Aleksander Hellat, Foreign Minister of Estonia from November 1922 to August 1923 (and again in 1927).  Her book contains a version of the photo showing Holsti, Kukk and Hellat seated as they are above, but without the two men standing behind them.  She isn’t sure who the standing men are.