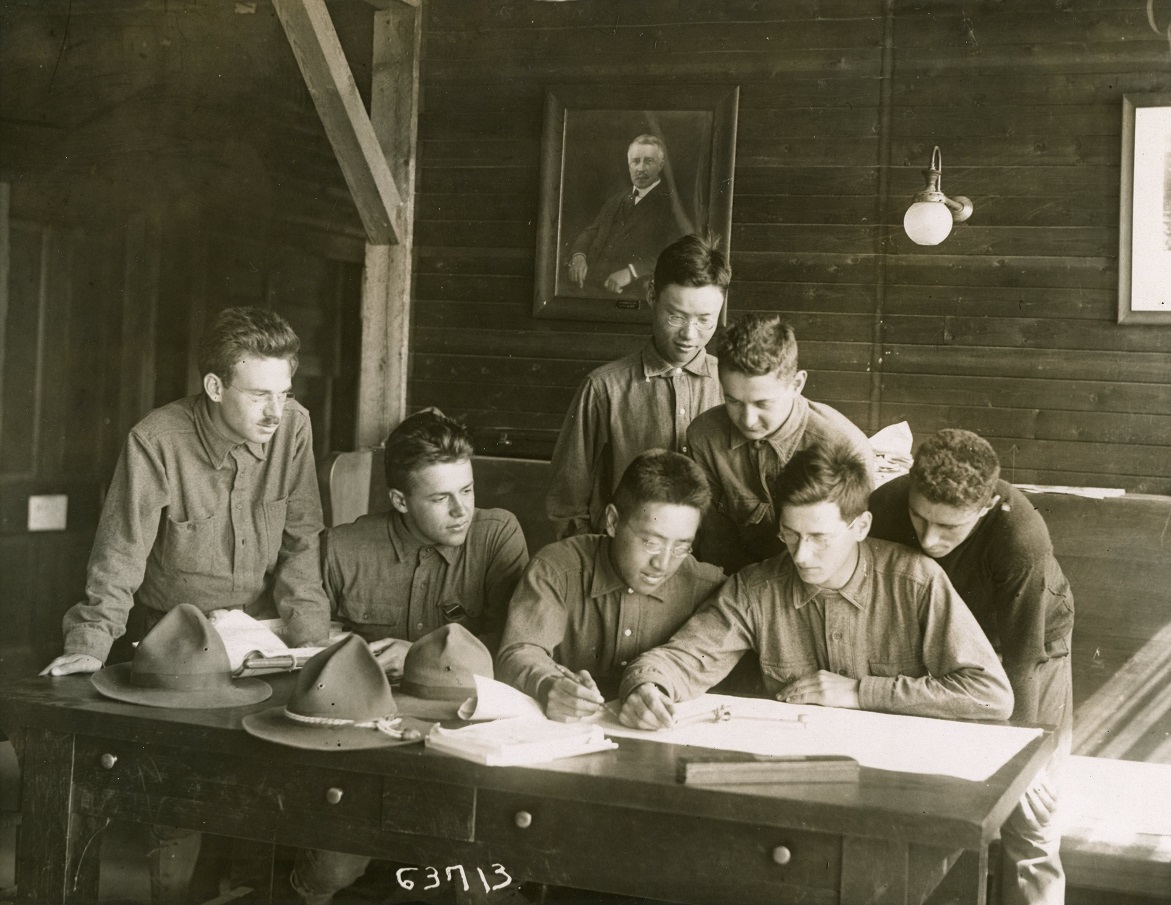 This publicity photograph was taken at a summer camp in East Machias, Maine, called Camp Cunningham.  The camp was organized by the Massachusetts Institute of Technology (MIT) to provide military-style training to students after their sophomore year.  The decision to organize the camp was made after the United States entered World War I in April 1917.  I haven’t found any references to the camp in 1918, so it must have been discontinued after one summer.

The young men in the photo are identified on the back, along with their hometown.  All but two had home addresses in Massachusetts.

The photo contains seven students, but only six names are listed, so it’s hard to be sure which men they refer to.

Also written on the back: Tech engineers, Camp Cunningham, East Machias, Me.  The word Tech is short for Technology, and is used as shorthand for the school (MIT).  So, Tech engineers means engineers from MIT.

The most interesting thing about the image is the presence of two students from Canton (Guangzhou), China.  These two young men, K.T. Lee and T.S. Sili, probably enrolled in the camp in order to acquire skills and training that could prove useful after they returned to China.  It’s very likely that they were studying at MIT through the Boxer Indemnity Scholarship Program, a highly competitive program in China which paid the educational expenses of Chinese students studying in the United States.

Just to be clear, the young men in the photo were not serving in the U.S. military.  During World War I, the armed forces of the United States were segregated by race.  Asian Americans were categorized as “non-whites” and assigned to Asian-American units.  (By contrast, Native Americans were categorized as “white” and integrated into white units.)

There were 100 “sophomore volunteers” enrolled at Camp Cunningham.  I keep wondering why two students from China were selected for this publicity photo.  Maybe the university wanted to highlight its international reputation and present a diverse group of student engineers.  Maybe these seven students had excelled in competitions or leadership positions at the camp.

I looked for information online about the seven students.  I think J. Mandelbam was Joseph J. Mandelbaum (1900-1996), whose parents had immigrated from Poland (Russia).  At some point his family changed their surname to Mandell.

R.H. Gilbert was a bugler and the leader of the Technology Sophomore Military Band.

I think Fritz Boley was Frederick William Boley (1897-1955), who attended MIT and whose mother lived in Buenos Aires, Argentina.  A student named Boley won a half-mile swimming race at Camp Cunningham on the Fourth of July.

Technology Review, Vol. 19 (1917).  Camp Cunningham is mentioned several times in this publication of the MIT Alumni Association, including a lengthy description of camp life on pages 446-455.