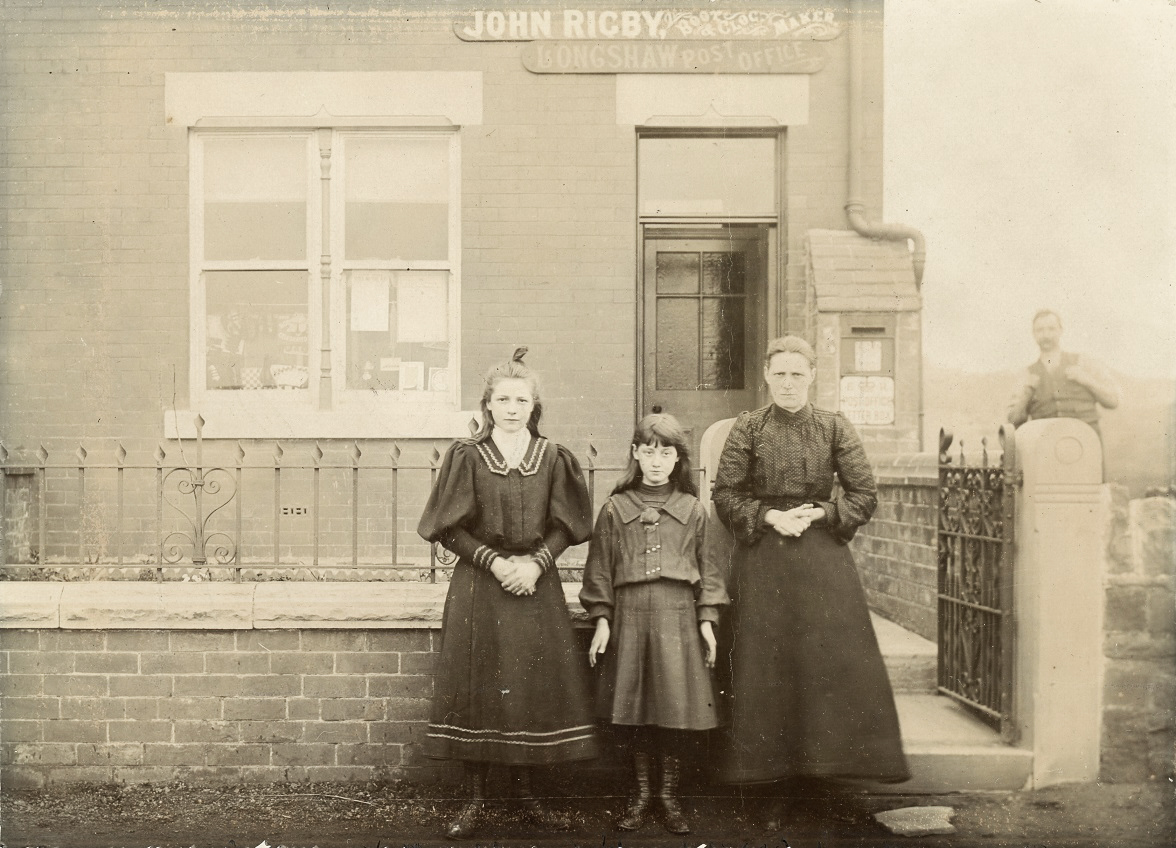 Wikipedia describes Longshaw as “a small residential and agricultural area within Billinge Higher End at the western boundary of the Metropolitan Borough of Wigan, in Greater Manchester, England.”  Historically, the area was part of Lancashire.

I didn’t find any information about John Rigby.  Is he the man striking a pose in the background?  Unfortunately, the fellow is out of focus.  I wonder if his wife and daughters ran the post office while he was making boots and clogs. 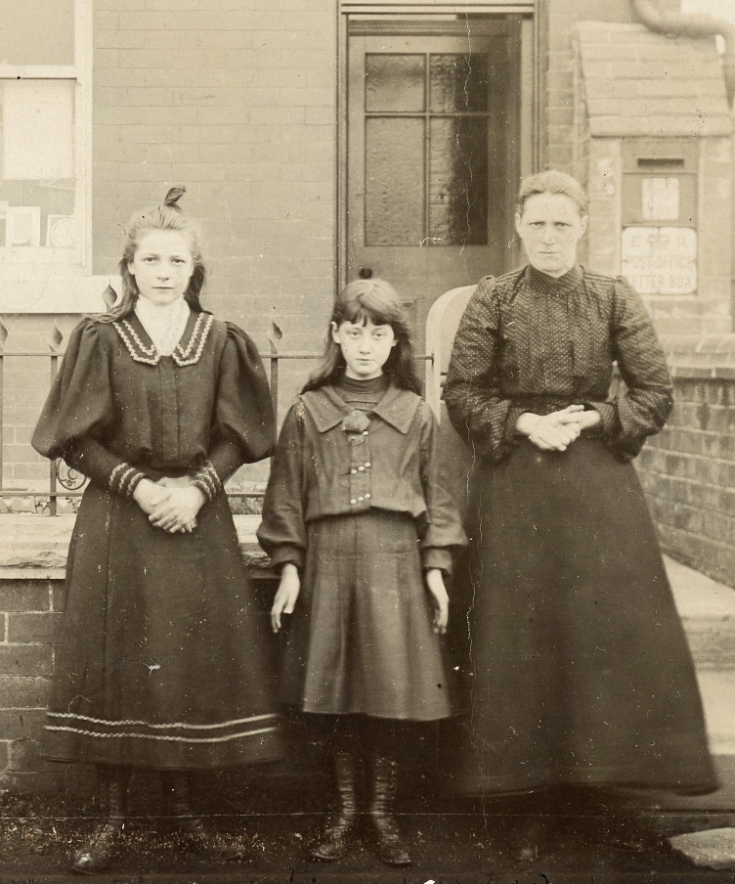 When I Googled the Longshaw Post Office, I was disappointed to read that it closed in October 2018.  The last postmistress, Pauline Hartley, talked about it in Wigan Today in August 2016 in an article titled “Plea to save village post office.”  At the beginning of the article, you can see a picture of her standing in front of the building.  I’d like to quote some of what she said because it was probably just as true more than a century ago:

People were very sad when they saw the ‘for sale’ sign. There’s only us, the pub and another post office further down left in Billinge and a lot of people don’t want to go into Orrell, they like going where they know.  An entrepreneur could run a cafe with a post office, it could be a solicitors or accountants and even hairdressers have had post offices.  It’s just about keeping a small area for it.  You really become part of the community.  If someone doesn’t come in at their usual time we speak to the neighbours and they check if they are alright.  That’s the sort of place it is, we all help each other.  It’s a great lifestyle.  We’ve brought up our daughter while we’ve been here and we’ve spent far more time with her than we would have done in a nine-to-five job.  This part of Billinge is a lovely area too, it looks out over open fields.

The Longshaw Post Office closed on October 27, 2018.  Just after the closure, in November, another article in Wigan Today noted that the building would no longer be used as a post office.

Update: a reader in Manchester used her amazing sleuthing skills to figure out where the post office was when the cabinet card was made.  In her comment under the post, Emma [EMS] said that the old post office was actually two doors away from the more recent one.  Let’s forget about the recent one and concentrate on the older one.  The old post office wasn’t in the house on the end of the building, as you would expect from the cabinet card, but in the house next to it with a white door, second from right (#87):

The most recent post office … isn’t the one on the cabinet card. The cabinet card post office was to the left, being one of a row of five houses. It’s most likely the second building in for the following reasons.

On the 1907 Ordnance Survey map there are four houses, but five houses on 1926 map. It would seem that the end house is actually newer. The end house was built in the same style but bigger and with a bay window. The ridge tiles of the first four houses match in colour but differ from the last. The air bricks near the roof line are also one row higher on the last house.

There are matches between the building on the cabinet card and the second house in. The second house in has the correct ground floor window (it’s even wider than the other three), odd markings to the lower right (as though something has been changed here where the postbox was), and a gate threshold stone with more wear than its neighbours (years of customers wearing clogs).

I highlighted the part about the threshold stone because it’s such an interesting detail.  You can see what she means below:

I asked Emma if she had an idea about when the photo was taken, and she responded:

The post box has the letters “ER” on the front. This stands for Edward(us) Rex, so must have been after the start of Edward VII’s reign in 1901.
(You can see the same kind of post box in the right hand photograph here: http://www.cvphm.org.uk/EdwardVII2.html)

Finally, in the course of her sleuthing, Emma came across a reference to a photocopy of the cabinet card at the Greater Manchester County Record Office.  The photocopy isn’t displayed online, but the description of it matches perfectly.