March is Women’s History Month in the United States, and few professions have historically been as closely associated with women as nursing.

Update, April 11, 2019: I made a significant error in the initial version of this post.  When I first searched online for information related to the Montefiore Hospital School of Nursing, the only results I saw were connected to the school of that name in Mount Vernon, New York.  At the time, I decided not to look for information about the individual nurses, thinking I might do that later.  A few days ago I Googled the principal of the school, identified on the photo as M.H. Shellenberger, and was surprised to discover that she worked at the Montefiore Hospital School of Nursing in Pittsburgh, Pennsylvania.  You can read about the history of the hospital here and here.  In 1990 it was incorporated into the University of Pittsburgh Medical Center, which is why Google didn’t show me any recent results for it.  I accepted the first information I saw because it seemed reasonable.  I should have confirmed it!

In other news, I finally subscribed to a searchable newspaper archive.  I chose Newspapers.com, a service of Ancestry.com, because I’ve been an Ancestry member for a while and I was curious how user-friendly their newspaper service would be.  So far I like it, and I also found something relevant to this post.  On May 18, 1938, The Pittsburgh Press published a notice about graduation exercises to be held at the nursing school on the following evening.  The notice included the full name of each woman in the graduating class:

On the photo, each woman is identified at the bottom by first initial and last name.  I cropped the names from the image at the top of this page, but I captioned the detail images below with each woman’s name, beginning with the back row and moving from left to right.  I’ve added their first names from the newspaper clipping: 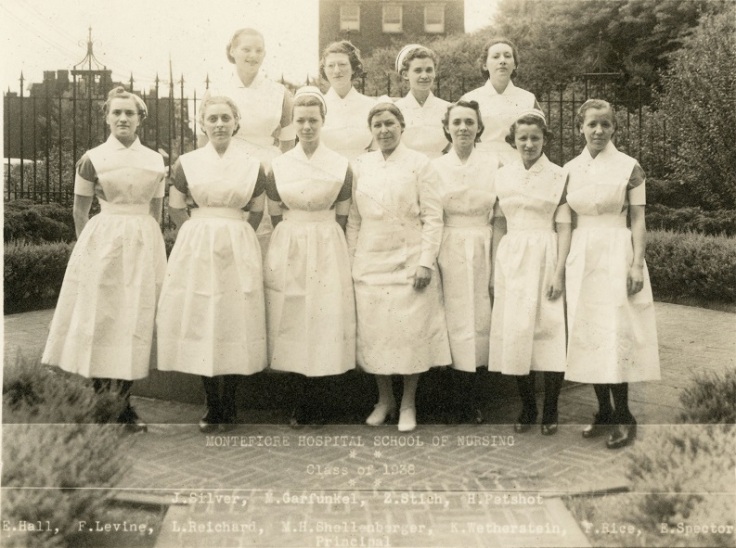 43 thoughts on “Montefiore School of Nursing, Class of 1938”